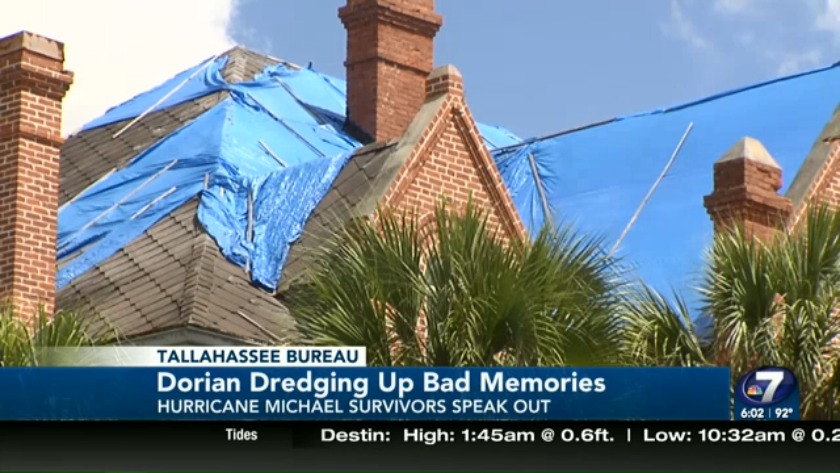 BLOUNTSTOWN, Fla. (CAPITOL NEWS SERVICE) - Almost eleven months ago, residents in the Panhandle were surprised by a category five hurricane that didn’t lose strength as it moved inland. Now, the sight of Dorian on their television screens has been making them relive one of the scariest days of their lives.

While most of the physical scars in Blountstown have healed, the mental scars left by Michael are as fresh today as they were nearly 11 months ago, thanks to another monster storm named Dorian. (James E. Wyatt)

“It was a traumatic experience and the anticipation of, you know, going through it again is quite devastating to your mental capacity,” said Bailey.

The same is true for Mary Folsom. She lost a brother more than a decade ago from hurricane-spawned tornadoes.

“I have trouble sleeping now because of the hurricanes and tornadoes and stuff like that,” said Folsom.

One of Dorian’s earlier tracks took the storm across the state into the Gulf, and then to the Panhandle.

“I was not at all very happy. I’m very thankful it's not coming our way,” said Hall.

Michael’s 145 miles per hour winds were a surprise when they blew through the town. Those we spoke with who rode it out said they wouldn’t do it again.

James Glass, 91, rode out Michael. During the storm, he watched a tree three feet in diameter snap in his front yard.

“If there’s another one [that] comes here and they name it, I’m gonna run,” said Glass.

Nine out of ten insurance claims in this small town have been settled, but nearly 400 are still pending. The city is also still waiting for an $11 million reimbursement from FEMA for debris removal.

While most of the physical scars in Blountstown have healed, the mental scars left by Michael are as fresh today as they were nearly 11 months ago, thanks to another monster storm named Dorian.