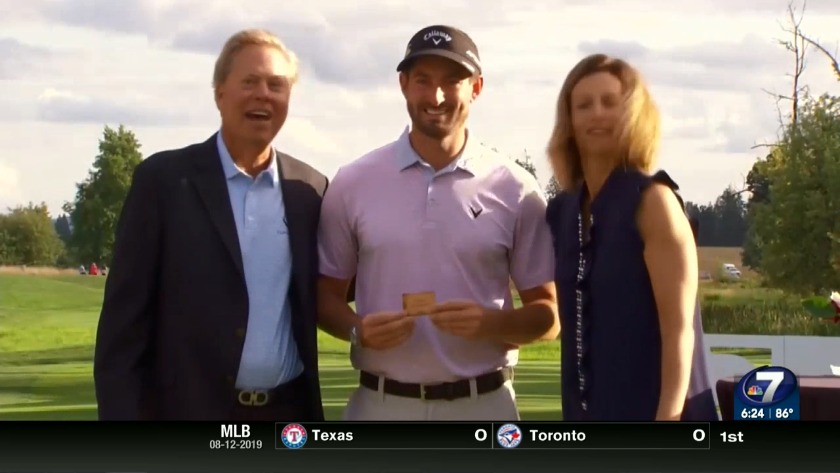 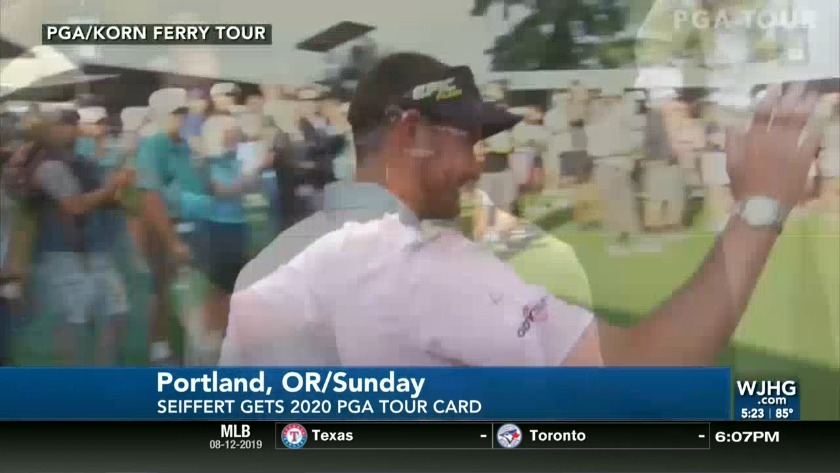 PORTLAND, OR (WJHG/WECP) - For those on the fringe of the top 25 in the Korn Ferry Tour points, playing to secure a PGA Tour card in the final round of the Portland Open Sunday afternoon was one of the most nerve-wracking rounds of their lives.

Chase Seiffert shows off a big smile after being handed his 2020 PGA Tour card Sunday in Oregon.

For those yet to secure a Korn Ferry Tour card, the Tour Finals beginning Thursday in Columbus and spanning three weeks through Boise and Newburgh, Indiana, will be equally tense.

The pressure is off Chase Seiffert.

The 28 year old accumulated enough points to guarantee a top 25 finish and PGA Tour card in July,guaranteeing a spot on the Tour in 2020. Sunday evening, he received the card at a post-round ceremony with the other 25 graduates to make his promotion official.

"It didn't really hit me until Sunday morning," Seiffert said. "You know Standing on the edge of the green there, waiting for them to call my name, just replaying the journey in my head, the long road that it took me to get there. It's so rewarding to walk across there to get the card. I'm still smiling!"

To call a journey to success a "long road" is common, but it's a accurate description for the Mosley and Florida State alum. Although Seiffert has played in PGA Tour events and made cuts, finishing as high as a tie for ninth at the 2018 Travelers Championship, his path to the Tour had been strictly through Monday qualifiers. Previous attempts through Q School had fallen short and as recently as one year ago, Seiffert didn't even have full-time status on any tour.

"There have been a lot of low points in my professional career," he admitted. "When you just miss at Q-School and know you are going to have a tough year of Monday qualifying, that’s brutal. But the long journey has made it even sweeter, rather than getting out of college and getting my card immediately.”

And of course, the long road to success was laid down long before his professional career even got underway.

“The countless hours where you’re the last one at the course on the range adds up. You think to yourself when you are a kid that each putt when you’re practicing is to win the Masters. You hope it amounts to something one day and it finally has led to me getting my Tour card.”

As of Monday, Seiffert says he's carrying the card around with him and doesn't go more than an hour or so before pulling it back out and looking at it. It really is a dream come true.

With three more Korn Ferry tournaments left to play before he moves on to the PGA Tour, the pressure of playing for a card has been relieved, but there's more he wants to accomplish before making the step up to the top flight of the sport.

" I'm not putting a lot of pressure on myself to win. I know I have the game to do it, and I've been close all season, but it's not something I feel like I have to do."

He has four top fives, with his best finish of T-2 coming at the Dormie Network Classic at Briggs Ranch in April.

"I would much rather wait a few months and get a win in the fall series on the PGA Tour if I was going to do that. But there's no pressure on it, I'll just go out there and keep on playing my game and if it happens, that will be great."

After the Korn Ferry Tour Championship running August 30-September 2, there's no time to rest. Two days of PGA Tour orientation follows, with A Military Tribute at The Greenbrier teeing off September 15, the first PGA Tour event of the 2019-2020 season and first Seiffert will play in as a full-time exempt player.

He'll be busy, but every once in a while he might stop to look down at the card. And he'll cherish every minute of it.